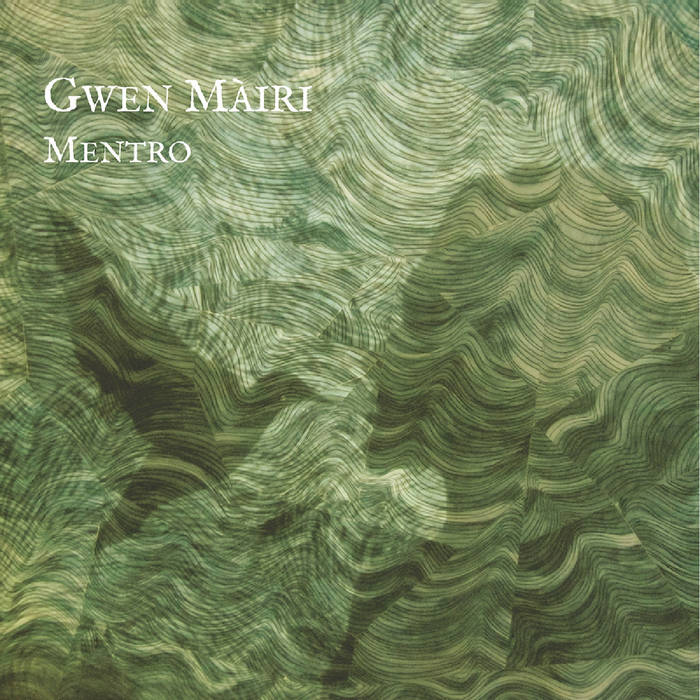 A debut solo album from the Welsh/Scottish harpist.

Gwen Màiri, brought up in a Welsh-speaking family in Scotland, has ventured out on her own after many years of collaborations to produce an album of Welsh music. Combining the melodies and literature of Wales with classical finesse while also capturing the “hwyl” of the folk tradition, this album brings together virtuosity, sensitivity, unique vocals and a winning combination of instruments.

Mentro means to venture, or to dare, and this album marks a turning point in Gwen’s career - taking her from a life mainly made up of collaborations within traditional and classical music, to being a solo artist in her own right. Drawing on many years of research, musing and reawakened memories, as well as original aspects inspired by ancient words from a 6th century bard, words of passion from the old testament and also poetry written by her mother and grandfather, this is an album with a deep sense of soul and belonging. The title Mentro has come from the traditional tune (included in the album on the track Y Deryn Pur), Mentra Gwen, “Venture, Gwen”. The word Mentro was most often heard in Gwen’s childhood within the phrase “Paid a mentro!” (Don’t you dare!), but it now seems that the time is right to dare... Mentra, Gwen has become her mantra!

An album firmly rooted in Welsh tradition, Gwen has woven an intricate web of the old and the new, the old often taking new forms and the new sounding like something which has always been.
The Welsh call the southern part of Scotland and northern England, Yr Hen Ogledd, The Old North, harking back to a time long ago when the language spoken there was an ancestor of modern Welsh. Born and raised in Scotland, Gwen pays tribute to her Scottish and Welsh upbringing in taking inspiration from the words of the 6th century bard, Aneirin (who came from what is now mid-Lothian), and his epic poem, Y Gododdin, in the track Cyn Gwawr (Before Dawn) and also references Yr Hen Ogledd in Rheged.

Her love of ancient words is also expressed through her creation of the song Rhosyn Saron (The Rose of Saron) which takes its passionate verses from the Song of Solomon in the Old Testament. The almost tangible feeling of human emotion and life experience through the years is continued through words written by Gwen’s mother (in Tawelwch) and her grandfather (in Hwyr). Tawelwch
(Quietness) muses on the beauty of stillness throughout life and Hwyr (Late) deals with the passage of time and reflects on life from the perspective of old age. Both have a strong sense of place, namely west Wales and in particular the area of her mother’s upbringing, on the banks of the river Teifi, also reflected in the track of the same name; an instrumental item whose riverside theme uses the song Blewyn Glas ar Ddole Teifi (Green Blades on the Teifi’s Meadows) and the reel, Hyd y Frwynen (The Length of the Reed).

Other tunes such as Y Feillionen (The Clover) and Y Dydd Drwy’r Ffenest (The Day Through the Window) come from research in the National Library of Wales as part of 10 Mewn Bws in 2013, encapsulating the notion that this album comes from several years of “mental notes”!

Music and emotion come first and foremost in this album, expressed through Gwen’s contemporary but traditionally influenced style of playing. Contributing their own extraordinary touches are Gwilym Bowen Rhys on guitar, mandolin and fiddle (Folk Singer of the Year, Wales Folk Awards 2019 and Folk Singer of the Year nominee, Radio 2 Folk Awards 2019) and Jordan Price Williams on cello (of VRï - Best Traditional Track and Best Album, Wales Folk Awards 2019 and Best Traditional Track Nominees, Radio 2 Folk Awards 2019). The three form a tight and complimentary trio, working in perfect partnership, and the live nature of the recording process has enabled them to react with sensitivity and grace to each other’s playing. With Aled Hughes bringing his expertise to the recording and co-producing side in the studio at Sain, the process was relaxed and natural. The result is a delicate and refreshing album which captures a unique perspective of Welsh music through Gwen’s Welsh roots and Scottish upbringing.

You’ll be glad that Gwen has “dared” to make this exceptional album!

Gwen Màiri is a graduate of the Royal Scottish Academy of Music and Drama. Her career busy life includes work with professional orchestras and chamber groups, teaching in schools and on youth folk music courses, publishing books of music for lever harp through Alaw, playing for weddings and events and also performing her own music. Gwen recently represented Wales at Festival Interceltique Lorient, performing solo each night to audiences of thousands at the Stade du Moustoir as well as in the Wales Pavilion and in Église St. Louis and Reservoir Enclos du Port.

Despite traditional music being ever-present all through Gwen’s life, she studied classical pedal harp at the Royal Scottish Academy of Music and Drama (now the Royal Conservatoire of Scotland) and it was only after graduating that she began to turn seriously towards folk music. A particular turning point was the birth of her first son which reawakened within her a love of the Welsh traditional songs she had been brought up with. Developing from there and bringing her Welsh and Scottish influences to the duo, Tornish, and then being part of the 2013 ground-breaking Welsh music project, 10 Mewn Bws, led to Welsh music being her main passion. Her playing can also be heard on the albums of Gwilym Bowen Rhys - O Groth y Ddaear (2016) and Arenig (2019).

The stunning image on the cover is a giclée print by the artist Lea Sautin. Lea, originally from Llanbedrog, is a print-making graduate of the illustrious Glasgow School of Art which is where she and Gwen got to know each other. Lea’s watery image of a figure and a bird reflects the ideas in the album and lends itself perfectly as an emotive visual for the music.
www.leasautin.weebly.com

Bandcamp Daily  your guide to the world of Bandcamp